Human evolution has been punctuated by a long succession of life-changing inventions and discoveries. From penicillin to anaesthesia and antibiotics, some serendipitous scientific discoveries have spawned staggering success in changing the world of healthcare. The story of AMYRA Biotech AG may soon belong to this inventory of successes—a company that is at the forefront of developing safe and effective treatments for gluten-related disorders.

Under the leadership of Werner Tschollar, founder and CEO of AMYRA Biotech AG, the company is changing the game in treating gluten-related disorders. With over 25 years of experience in the pharmaceutical, biotech and financing industries, Tschollar branched out and grew a track record of founding biotech companies developing therapeutic products that will cause a paradigm shift in the treatment of life-impairing illnesses. AMYRA is one of those companies. Prior to his career as a serial entrepreneur, he held executive positions in larger corporations such as BMS/Princeton, Schering Plough and Novartis and was the co-founder of a large private equity fund in Geneva.

In this exclusive interview, Tschollar shares his insights and expertise on gluten-related disorders and explains how AMYRA's products have the potential to establish a new standard of curative care in a field that currently lacks any pharmaceutical treatment possibility.

What are the challenges plaguing the treatment of gluten-related disorders today?

Gluten-containing foods have been an important part of the human diet for more than 10,000 years. However, it has been found that ingestion of gluten proteins in wheat, barley and rye contributes to gluten-related disorders. The widespread and global prevalence of non-celiac gluten sensitivity (NCGS) and celiac disease (CeD)—the two major and clinically distinct gluten-related disorders— demonstrates that the health and wellbeing of an enormous segment of the global population is compromised by these pathologies.

To date, the only way patients can avoid symptoms and the long-term health complications caused by these pathologies is via strict adherence to a gluten-free diet. Unintentional intake of gluten either through cross-contaminations, complex food labelling or difficult social and environmental circumstances make the ‘gluten free’ solution both problematic and difficult. This fact has been confirmed by studies which showed that a significant proportion of celiac patients have persistent villous atrophy despite being on a gluten-free diet.

AMYRA's mode of action: AMYRA's exopeptidases rapidly and comprehensively digest gluten immunogenic peptides, which are formed in the digest of gluten and are immunogenic for people with celiac disease and non-celiac gluten sensitivity

Currently, there are no pharmacological treatments available for either condition; AMYRA is here to change that.

How is AMYRA Biotech changing this narrative?

AMYRA Biotech is a Swiss company that has developed unconventional and novel enzymatic solutions for both NCGS and CeD via a unique combination of recombinant exopeptidases that destroy the chief immunogenic trigger of gluten-related disorders, namely gluten immunogenic peptides (GIPs). These GIPs are known to be formed in the digest of gluten and can be either partially or wholly responsible for the adverse immune responses borne by patients. Since a gluten-free diet is almost impossible to maintain, AMYRA has developed treatment solutions for gluten-related disorders with recombinant enzymes that are taken orally, in conjunction with potentially gluten-containing foods and have an excellent degradation capability for GIPs. There is an urgent need for pharmacological products that allow patients to remove the gluten cross contaminations from their diets.
GIPs are resistant to physiological digestion and are resorbed into the body in all human beings. Whilst healthy individuals tolerate this resorption, GIPs can trigger violent inflammatory cascades in people affected by CeD or NCGS. AMYRA’s proprietary and patented enzymes—the only know exopeptidases that completely degrade GIPs—cleave GIPs at distinct motifs and rapidly convert them into harmless single amino acids and dipeptides that are inert and do not cause symptoms in patients.

At AMYRA, our goal is to create a treatment or therapy to avoid the long-term complications caused by GIPs in people suffering from gluten-related disorders

What are the factors that spurred the inception of AMYRA?

AMYRA’s enzymes can be referred to as a natural phenomenon. Shortly prior to the creation of AMYRA, I chanced upon a publication that described how a fungus, specifically a dermatophyte fungus, is capable of destroying the strongest structural protein in our body—nail and hair. By looking at the properties this fungus had, we realised that certain exopeptidases are capable of destroying prolinerich peptides, including GIPs. This spurred the vision that these exopeptidases could potentially work as a treatment. AMYRA was formed shortly after the discovery and together with LONZA—a significant manufacturing and research company in Switzerland-it screened over a thousand different strains of potentially viable exopeptidases that could qualify as a therapeutic.

AMYRA’s products will support the conventional and sub-optimal way gluten-related disorders are currently being treated. Gluten is a ubiquitous product and is difficult to avoid, even in gluten-free diets. At AMYRA, our goal is to create a treatment or therapy to avoid the long-term complications caused by GIPs in people suffering from gluten-related disorders.

Please shed some light on the current stage of development of AMYRA Biotech’s solutions.

In the short-term, AMYRA plans to have its non-prescription product, AMY01, in the US market by the end of the year, followed by the European market. With a prevalence of 5-6 percent, NCGS represents a major public health issue as well as a major market opportunity. The product will be approved via the NDI, GRAS and Novel Food application procedures and aims to alleviate symptoms in people suffering from NCGS.

In parallel, AMYRA will continue to develop its prescription drug, AMY02, specifically for CeD. AMY02 is currently being designed to quickly and comprehensively degrade GIPs in the digest of gluten and inhibit the immune generated T-cell activation, subsequent inflammations and long-term complications occurring in celiac patients whose diets are often gluten-contaminated.

The product would provide a major shift in helping celiac patients avoid the foreseeable long-term complications associated with the disease such as malnutrition, osteoporosis, skin disorders, other diseases and even gastrointestinal cancers.

Looking ahead, where do you see your company? What does the future hold for AMYRA Biotech?

AMYRA is actively seeking to join hands with one or more distribution or collaboration partners to successfully distribute its dietary supplement, AMY01, and further develop its prescription drug, AMY02. 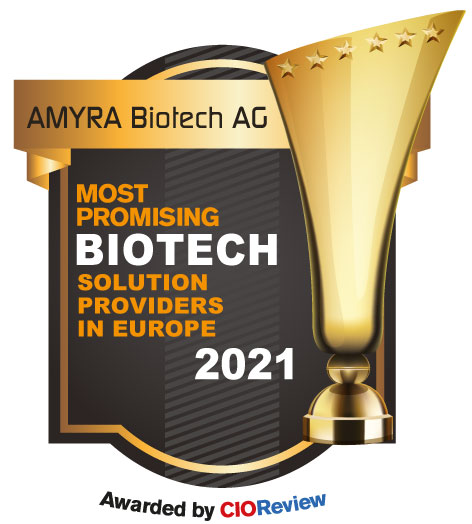 Description
AMYRA Biotech AG is a Swiss based, privately held biotech company that develops a highly promising, novel, enzyme-based treatment for celiac disease (gluten intolerance) with high probability of clinical, regulatory and commercial success.AMYRA’s proprietary and patented enzymes—the only know exopeptidases to completely degrade GIPs—cleave GIPs at different motifs and rapidly converts them into harmless single amino acids and dipeptides that are inert and resorbed in the body, without activating the immune system 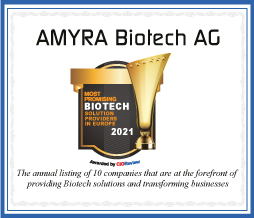 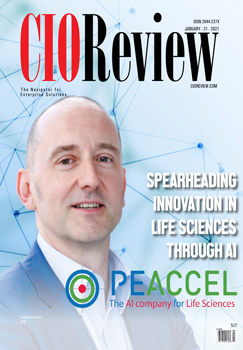