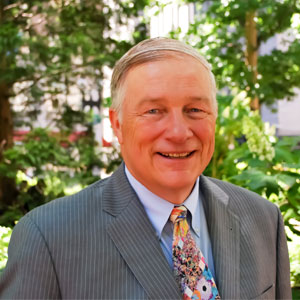 Richard T. Schumacher, CEO
What can pressure do? “Quite a lot, actually. It is an amazing and powerful force of nature,” states Richard T. Schumacher, a veteran scientist, serial life sciences entrepreneur, and the founder and CEO of his fourth publicly-traded company—Pressure BioSciences, Inc. [OTCMKTS:PBIO]. According to Schumacher, all biological substances (cells, tissue, viruses, bacteria, etc.) can be affected by pressure. For example, pressure can kill pathogens (making them safer to study), speed up chemical and other reactions (reducing test time, thus reducing time to discovery), and improve the quality of research studies. That said, one of the most innovative applications of pressure that PBIO scientists have developed, patented, and made available to the life sciences research community is the use of cycles of pressure to enhance the process of lysis (or cell disruption) to effectively release biomolecules like DNA, RNA, proteins, and lipids from cells for subsequent analysis. Not surprisingly, a growing belief among scientists is that high quality results in scientific experiments rely to a great extent on high quality extraction of biomolecules from the cell. 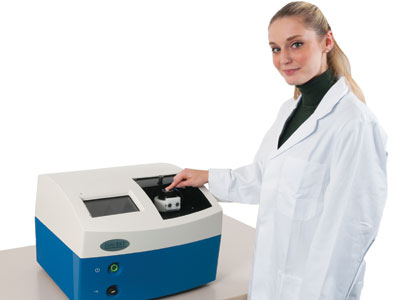 In the sample preparation space, cell lysis is considered one of the most complex and critical steps in the preparation of samples for subsequent testing and research. Current methods for extracting biomolecules involve the use of chemicals, blades, metal beads, sound waves, or other mechanical methods. Although these methods appear to work, scientists are now beginning to realize that such harsh lysis methods can damage the biomolecules inside cells. These methods also result in sample loss and degradation, cross-contamination, shearing of molecules, and/or even limited applicability to different sample types (animal/plant and normal/diseased). Pressure, on the other hand, can be titrated to carefully break the cell membrane while minimizing impairment to the proteins and other cellular components, by exerting the exact level of pressure required for lysis (not too much and not too little). “While scientists have been well aware of the potential of pressure in theory, the risks of working with high pressure in the laboratory coupled with the lack of commercial instruments have for decades been major deterrents to the use of pressure in scientific research,” mentions Schumacher. This is where Massachusetts-based Pressure BioSciences has been able to turn the tables. Pioneering the game-changing concept of Pressure Cycling Technology (PCT), PBIO commercializes the use of pressure in labs for the high-quality preparation of research samples for biological studies.

PCT is a patented, enabling technology that uses alternating cycles of hydrostatic pressure between ambient and ultra-high levels (up to 90,000 psi) to safely, conveniently, and reproducibly control the actions of molecules in biological samples. Using PBIO’s powerful PCT platform, a researcher can manage pressure and turn it on and off, akin to controlling light with a switch.

Moreover, a biological substance’s reaction time to pressure is instantaneous: by applying pressure to a cell, every biomolecule in or on the cell experiences the same pressure at that given moment as opposed to adding chemicals or using temperature, which usually takes a considerable amount of time to disseminate (equilibrate) throughout the cell. “As a result, PCT enables scientists to obtain more accurate research outcomes, much faster,” states Schumacher.

On the other hand, when a cell is lysed through mechanical or chemical means, because it is difficult for the scientist to control these methods, there may be a greater chance that the proteins in the cell could be damaged. Therefore, if a scientist aims to find and study a particular protein inside a cell, and is not using PCT for the cell lysis, the chances of successfully extracting the particular biomolecule from the cell may be reduced. “There can be as many as 10,000 different proteins in a cell, with each protein comprised of dozens to hundreds of amino acids, maybe more. So looking for a single amino acid abnormality on one protein out of up to 10,000 in a cell is like looking for a needle in the haystack. So scientists need the best possible tools available to help them in the discovery process. We believe that our PCT platform is one of those tools in proteomic research,” says Schumacher. As Pressure BioSciences’ PCT solution can minimize damage to the biomolecules in the cell, it also has the potential to increase the number of ‘needles’ in the ‘haystack’— thus increasing the possibility of discovery. To that point, PBIO’s Tag Line is “Discovery Starts with Sample Preparation™.” This aspect was further validated by Dr. Ruedi Aebersold, a renowned protein chemist, in a technical report for Nature Medicine (a leading scientific journal). Professor Aebersold wrote that the pressure cycling method not only helped his team increase the rate of successful protein extraction, but the higher-quality biomolecules also enhanced the outcomes of their studies.

Schumacher notes that throughout the biological sciences landscape, there are numerous enabling biotechnologies—“Our mission is to enable the enablers, with the goal to produce better outcomes for the scientist.” Striding in that direction, Pressure BioSciences recently acquired BaroFold Inc. to combine BaroFold’s patented high-pressure protein refolding technology with Pressure BioSciences’ PCT-enabled instrumentation. This new patented technology platform can control the refolding of misfolded recombinant proteins (many of which are used as therapeutic drug agents) into their native structures, as a way to improve and enhance their therapeutic activities. PBI has also recently received several patents for their unique Ultra Shear Technology (UST) platform, which has the potential to be used to make room stable, sterile dairy products (e.g., milk and liquid cheese). For the future, in addition to its current use in drug discovery, development, and design, Pressure BioSciences’ growth plan involves expanding PCT to areas such as agriculture, forensics and rape kit testing, non-invasive lipidomic screening of newborns, and more. 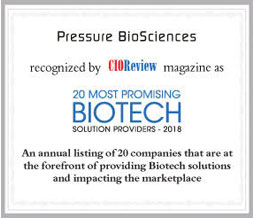 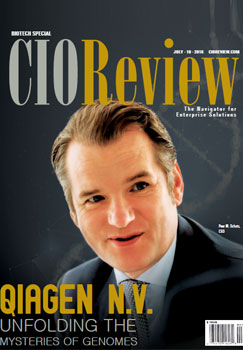